Through the belief that everyone can help change the world, we set out to release our first collection with a meaningful story. Although we did not know that to date this would be the hardest collection to launch and most emotional story we would ever share. 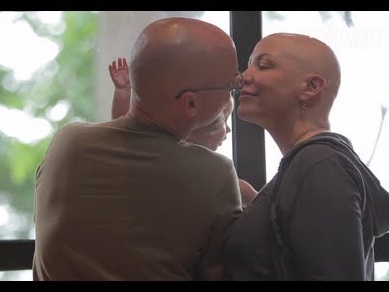 If you have followed or talked to me the past couple of years you will know that Joanna Montgomery played a really big part of my life and of my daily conversations. She not only has an amazing story but she also played a part in helping me raise money for a maternity ward in Uganda where children are born free of HIV/AIDS. Click here to watch

I met Joanna, through her husband Mark, whom I had worked for in the past. The announcement that Joanna had cancer was a shock to our entire community. We all saw how happy they were and until that point her pregnancy seemed flawless. Like many women, Joanna was diagnosed with cancer without any symptoms. It was during her emergency C section to Magnolia that her Dr. noticed a black spot, You can watch her video series to hear Joanna tell her story (I highly recommend it!).

I was really inspired by Joanna because she was really invested in sharing her story to help others get early cancer detection. We became friends when I reached out to her to help share her story with my campaign Power of A Mom, which I launched with Blood Water Mission to raise money for a maternity ward (the one I mentioned earlier). She accepted and that is where I got to know her and Magnolia.

I used to tell Joanna; remember Magnolia was a miracle so believe in miracles. It was that exact phrase that inspired me to come up with this collection. I wanted to make sure that every person who purchased an item would not only give back but that they would also believe in miracles and send that message to the universe to answer Joanna’s prayer of survival. As I curated the collection, I knew I wanted to call it Magnolia and I also wanted to surprise Joanna. I had some delays with the timing of my launch and at the same time Joanna became very ill. Her cancer had spread and it was not looking good. She sent a final plea, she wanted to survive long enough to be there for Magnolia’s 4th birthday. A few weeks later, Joanna lost her battle with cancer.

The mission of my company is to help others and in the midst of launching we lost someone who was so inspiring. Truth be told, I had no idea where to go from here. I, like many, was completed devastated by her passing. I was even more devastated for her daughter, Magnolia.

When I decided to launch the Magnolia Collection, I knew that it would change my life.

House of Darlings was created by a heartbeat of giving back and inspiring the world to believe that you can change the world.

And to every single person that purchased an item, THANK YOU. Together we were able to send over 130 kids on a shopping spree in California and Tennessee.